I love Comixology Unlimited! $6 a month, and I get access to what seems like tens of thousands of comics that I can read any time I want. Marvel, Image, Dynamite, IDW… nearly every American publisher is represented, plus a bunch of European and Manga titles. I had to crack open a beer and celebrate on the day that DC joined the library.

Among all the choices, in the last few months there have been three series that have really stood out to me, hitting that spot of exactly what I want in a comic. Here’s a quick bit on each of them:

Astro City
Writer: Kurt Busiek
Artists: Brent Anderson and others
52 issues
2013–2018
Publisher: Vertigo (DC)
OK, I’m an old-school comic reader. I don’t like my comics to be super-short (decompressed) with tons splash pages and not much exposition. Also, I kind of like it when the character-designs are kind of cheesy or campy, but the stories are taken seriously. That’s what you get with Astro City. This is one of those ‘analog’ books (see my post on Black Hammer) where there’s a knock-off version of Superman, a version of Wonder Woman, a version of Doctor Strange, etc, etc. Mostly, Busiek focuses on short stories in his Astro City universe (1-to-3 issues long). Sometimes he focuses on his superheroes; then, at other times, he focuses on ‘regular folks’ who are somehow caught up in the lives of these superheroes. If you check out the series, you’ll meet a woman who works as the personal assistant to the Sorcerer Supreme—later you mean the Sorcerer Supreme’s lawyer. There’s a woman who salvages robots that have been built my evil geniuses—and consequently destroyed by heroes. Even an alien pre-teen who gives us his perspective on what it’s like to have the Fantastic Four ‘invade’ your extra-dimensional, totalitarian society (ala the Negative Zone). Very fun. I’d recommend this series for any comic fan of the 70s or 80s. 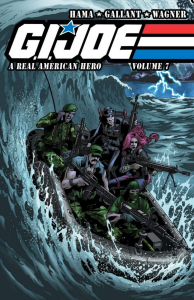 GI Joe: Real American Hero, Vol. 2
Writer: Larry Hama
Artists: S.L. Gallant and others
Publisher: IDW
2010–Present
112 Issues (and still counting…)
Speaking of 80s nostalgia. IDW tapped into it big time when they hired Larry Hama to continue his 80s run on GI Joe: Real American Hero. From 1982 to 1994, Hama was the main creative force behind all 155 issues of the original series. With IDW’s help, he kicked off a new run in 2012, starting with issue #156. A lot of people my age loved those GI Joe comics in the 80s—not to mention the cartoon and the toys. I was shocked at how well Hama captures the feel of that original run. You’ve got all of the same outlandish villains and outfits and codenames, but again (like Astro City) the crazy sci-fi plots are presented with just the right level of seriousness and humor.
But my favorite issues are when Hama gets gritty and detailed with what seem to be very well-researched spotlights on different aspects of military life. I remember in the original 80s run, one of my favorite issues involved this technical explanation of what it’s like to man a hovercraft. In this present day series, he does the same thing. He’s got stories devoted to tactics in a tank duel, a story on combat-survival, a sniper tactics battle on a mountain range that looks like it could be Afghanistan. So far, the new run has been chugging along for over a hundred issues, and I hope it’s been a big success for IDW because I’ve really enjoyed what I’ve read so far.

The Boys
Writer: Garth Ennis
Artists: Darick Robertson and others
Publisher: Dynamite
2006–2012
72 Issues (Including several Spin-Off Specials and Mini-Series)
The last series I’ve been working my way through is The Boys. It’s written by Garth Ennis, who is probably best known for his ‘Preacher’ series, which has been adapted as a TV series on AMC. Ennis revels in creating stories and characters that are abundantly non-PC. He tries hard to offend everyone on both ends of the political spectrum. So this book has some pretty raunchy scenes, hyper-violence, and homophobic and misogynistic characters—and it’s probably not for everybody.
Like Astro City, it’s set in a superhero analog universe, with its own version of Superman, Wonder Woman, Aquaman, etc. But in this world, almost all superheroes are phonies—they’re just in it for the money, the fame, and whatever particular form of vice gets them off. The ‘real heroes’ in the series are a team of spies and enforcers (‘The Boys’) who help keep the supers in check—or put them down when they commit some act that is too despicable to let slide.
I really like the concept of this series—which, like Preacher, is also being adapted for TV (this time by Amazon Prime). But sometimes ‘The Boys’ tries so hard to be outrageously raunchy that it ends up being almost Puritanical. There are times in the story where it seems like being ‘hedonistic’ becomes shorthand for being ‘evil.’ But the two things are not necessarily the same. Also a lot of the book is about the political cultures of Britain and America, and those sections seem kind of dated in a post-2016 world. Anyway, I’m looking forward to seeing how it’s updated to small-screen.

In a world ruled by magic, they’ll need all of her brains and his bravado to survive.

A deserted planet might not be big enough for the four of them! $2.99 on Amazon

The Idyll Trilogy continues as our heroes are attacked by an invader—from Mother Earth!?